A light shining in the depths, waves sparkling, what happens in the ocean? It is not men but nature that lights up and adds colours to these water bodies. Plunge with us into this article and discover the bioluminescence phenomenon, which makes sparks within seas and oceans.

How does ocean water light up?

You have probably already seen pictures of the water surface lighting up in blue or a luminous jellyfish in an aquarium. All these magical phenomena exist thanks to the bioluminescence of some marine species.

What is bioluminescence? It is the production and diffusion of light by a living organism via a chemical reaction. Not to be confused with phosphorescence which consists of emitting light after having been in contact with a light source.

More than 76% of animals living in the oceans are bioluminescent, including 1,500 fish species. 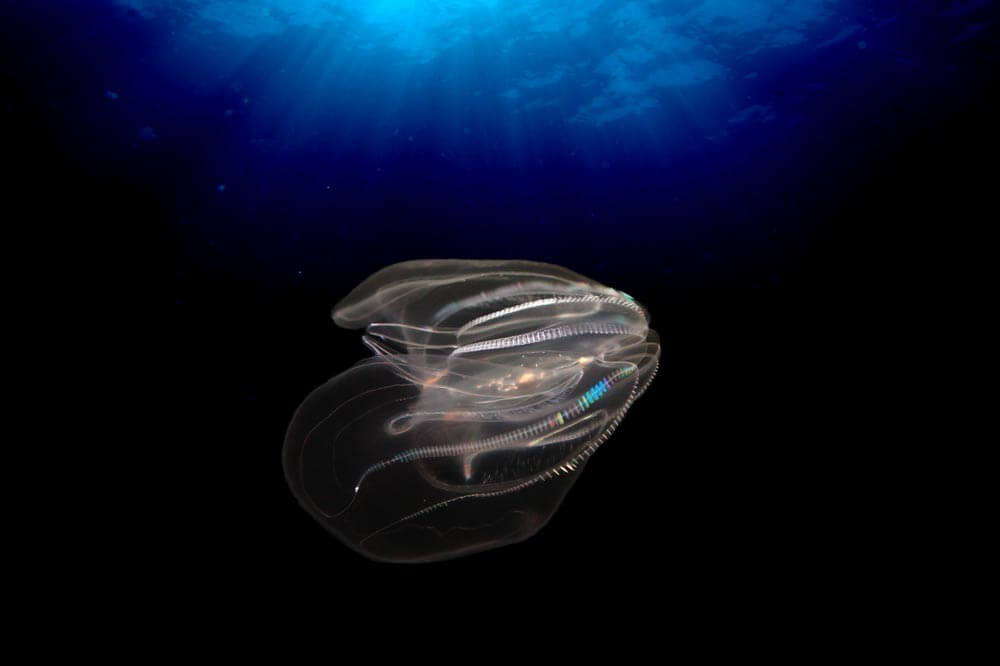 Bioluminescent marine animals either make their own light or host a bacterium that does it for them. Stay focus, it is the minute of science! These species have in their organism a molecule, luciferin, which oxidizes when in contact with luciferase (an enzyme) and which results in producing light.

This light is said to be cold as it hardly produces heat.

If salinity plays an important part in their environment, the depth of the ocean does not prevent their development. From the surface to abyssal depths, marine animals make oceans shine.

Why do marine animals sparkle?

On earth, very few species can actually make some light: some mushrooms, fireflies, glow-worms. As obscurity mostly reigns in oceans, it is quite surprising to discover that marine animals are more numerous than land species when it comes to creating light.

If you have seen the movie “Finding Nemo”, you cannot have missed the abyssal monkfish. This slightly scary fish, lurking in the deep, has a rod on its head with a light at its end. This physical feature is not here to help it see through the obscurity of abysses but to attract preys in order to feed itself.

Other species are also known for lighting up dark waters like jellyfish, sharks or even squids. Depending on the animals, bioluminescence does not have the same purpose. Some use it to communicate between themselves especially in times of reproduction, others use it to attack predators, trap preys or camouflage. For instance, deep-water shrimps spit luminous jets onto its predators. 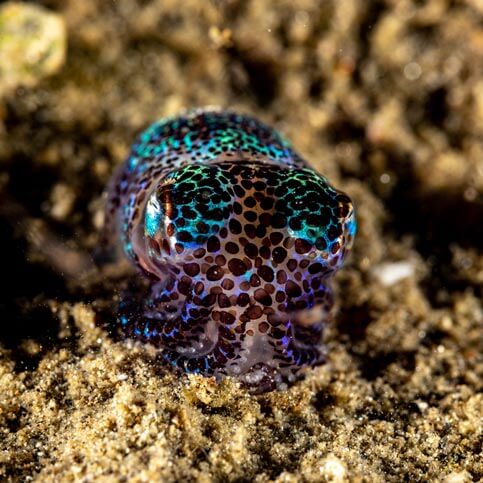 On surface, the most known are the phytoplankton (some are dinophytes) and microscopic shellfish (ostracods). Indeed, their bioluminescence offers a magic show that can be seen from some beaches. However, that blue light sparkles not to impress us but to deter predators from eating them. A phenomenon amplified by the movement of waves that illuminates the water surface. 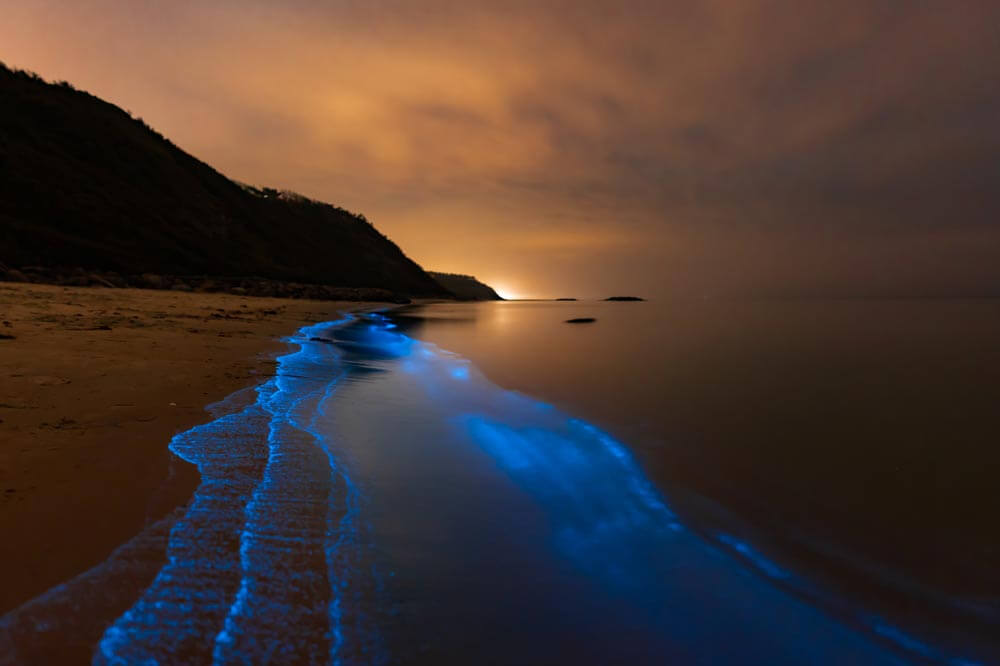 Where to observe marine bioluminescence?

On continents, it is quite rare to see a sparkling mushroom when walking in a forest or watching a glow-worm fly in our garden. In the oceans, even if there is quite a lot of bioluminescent species, you are unlikely to be facing, while swimming, a marine animal making light (unless you are diving with James Cameron within the Mariana Trench).

However, there are places in the world where we can observe bioluminescent beaches thanks to the presence of plankton, seaweed or luminous shellfish. To contemplate this exceptional sight, you will have to go to the seaside where the undersea feature enables a concentration of these organisms. Their large number is explained by the seabed structure which makes nutriments dredge up to the surface and therefore attracts them.

The best address is in Porto Rico, in the Mosquito Bay, a place rich in phytoplankton. When night falls, you may admire their blue light sparkling on the ocean’s surface. Many surfers make the most of these moments by surfing blue waves and playing with this natural light that seems so magical. You can also contemplate this phenomenon on the bioluminescent beach of San Diego in California, Okayama in Japan, Jervis Bay in Australia or even the Maldives. We are unlikely to see this phenomenon on the European coasts, although it has recently illuminated Belgian and Irish beaches. 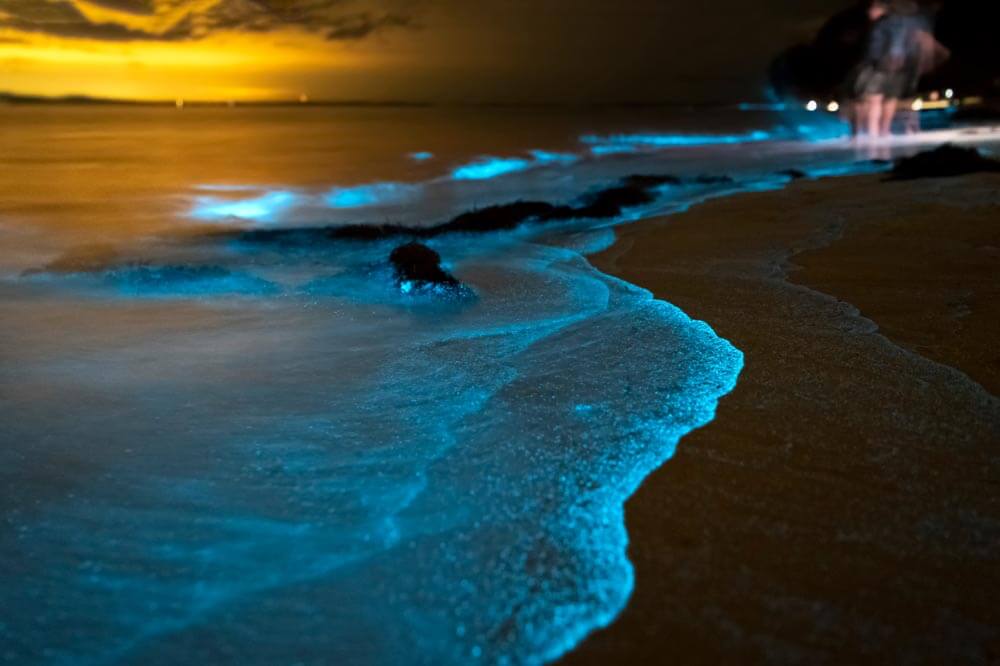 To have the chance to see water adorn itself with blue light, favour new moon nights when the sky is less bright, and do not forget to check tide times (low tide being the best time to see the ocean light up). Bioluminescent plankton proliferate when the sea is quiet, water temperature is hot and when there is a bit of wind. Once these conditions are met, keep looking at the ocean and try to spot a blue sparkle.

Nature will never stop to astonish us!